Fantasia 2008: Tomas Alfredson's LET THE RIGHT ONE IN This is something that has always gotten to me: I see a film I love, a smart, beautifully made piece of filmmaking that I cherish and instantly becomes a favorite. But there's a problem - it happens to be a genre film. Perhaps because I'm more inclined to enjoy genre films my opinion might be in question, so the reception accorded LET THE RIGHT ONE IN thus far is most appreciated, because it's proving to the world at large that, hey, it's not just me who thinks this is as good as I say it is. Granted, that includes top prize at the Tribeca Film Festival, not a festival known for its outstanding quality, but an award from them does tell the rest of the straights that perhaps they should also take notice. And they damn well should, because otherwise they'll miss the best film of the year thus far, one that just happens to be a Swedish vampire movie.

What makes LET THE RIGHT ONE IN so great as far as I'm concerned is that it understands that tragedy is one of the essential elements to truly great horror. Beyond just the mere idea that you have to care about the characters in order to get caught up in their horrific plight, the tragedy of it gives the story a sense of melancholy, a sadness that brings it closer to the heart than one would expect. At the heart of LET THE RIGHT ONE IN is a story about two lonely kids - one of them a shy, picked-upon boy, the other a vampire - and what Alfredson's does with this material (it's based on a novel by John Ajvide Lindqvist) is whip-smart in the quiet and natural approach he takes. FX are kept to a minimum and are not treated like money shots; the camera usually stands perfectly still and the action is treated no different than as if someone is walking from one end to another. Beautifully shooting in scope (this is one of the best scope features in years) Alfredson doesn't ram anything down your throat, as if to scream, "This is horror, so be scared!", he keeps it all simple, quiet and unfettered and it's all a beautiful thing. The casting of leads Kare Hedebrandt and Lina Leandersson places an emphasis on all this; these kids are as natural as can be, often silent, saying more with their eyes than anything else, a desperate desire for a love that has otherwise escaped them and much of what makes the film so heartbreaking comes from them. I risk sounding like a quote-whorish blogger by saying this (wait, I am a quote-whorish blogger), but LET THE RIGHT ONE IN suggest the kind of genre film that Truffaut might have made if he ever felt so inclined, and comparisons to THE 400 BLOWS are, in my opinion, not unwarranted. Like that landmark, this is a film that truly understand the pain and suffering that goes into childhood, which is also part of what makes it a great horror film, because all of that pain takes the horror and makes it even more powerful.

Last thing I want to address here is that LET THE RIGHT ONE IN is also the best vampire film since Katheryn Bigelow's NEAR DARK over 20 years ago. I once wrote a little thing about my dislike of vampire pictures over at the AMC monster thing and that still stands, but LET THE RIGHT ONE IN is easily the freshest vampire film in years and it should go without saying that it's one of the best ever made. While essential to the story, the vampire aspects are treated secondary to the characters, one of whom just happens to be a vampire, though she could be a kid with cancer or something. Vampire films have become such a dumb cliche (an earlier Swedish vampire pic, FROSTBITE, proved that point), but LET THE RIGHT ONE IN avoids all of them and barely feels like a vampire film at all. But it sure as hell is a horror film, and not just a great horror film but just a great film, period, and quite possibly the enduring movie classic of 2008.

It opens from Magnolia (via their genre arm, Magnet) in October.
Posted by Headquarters 10 at 7:48 PM

I was thinking of Near Dark when I saw this too.

If I hadn’t already seen it (albeit it a year later), I’d definitely be going to check this film out based on what you’ve written.

What makes LET THE RIGHT ONE IN so great as far as I'm concerned is that it understands that tragedy is one of the essential elements to truly great horror. – You’re absolutely right. I hadn’t thought of it before, but I think it’s one of the reasons that the majority of horror films don’t do it for me. 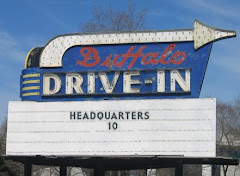